NOAA CRW designed the Regional Virtual Stations using a 5km global coral reef mask that was developed using available references. These included the Millennium Coral Reef project maps, the International Union for Conservation of Nature's (IUCN) Coral Reefs of the World (Vol. 1, 2, and 3), the United Nations Environment Programme-World Conservation Monitoring Centre (UNEP-WCMC) World Atlas of Coral Reefs, several country scale atlas publications, and a few other resources. The reef mask is updated as new information on coral reef locations is added periodically. Reef locations were separated into 214 individual Stations covering most of the global coral reef regions and following country boundaries and island nation groups where possible. Reef pixels within each jurisdiction were given a 20km buffer indicating the boundary of the individual Regional Virtual Station. The size of these regions varies greatly, but the methodology for calculating alerts within each region is held consistent.

CRW's developement of its daily global 5km satellite-based coral bleaching heat stress product suite has led to changes in the way we calculate Regional Virtual Station alerts. A time series of data is generated for each Regional Virtual Station based on data that fall within the boundary of a region/jurisdiction/sub-region. Rather than provide every value of every data point within the boundary of the station, we derive the Degree Heating Week (DHW) value and Bleaching Alert Area heat stress level (Bleaching Alert Level) based on the 90th percentile Coral Bleaching HotSpot value. This allows for each station's data to be internally consistent and keeps a few stray warm pixels from falsely exaggerating the alert levels. These values, as well as sea surface temperature (SST) ranges, and climatology information are stored in an ASCII text file and accessed by the Bleaching Heat Stress Gauge pages and Satellite Bleaching Alert email system. 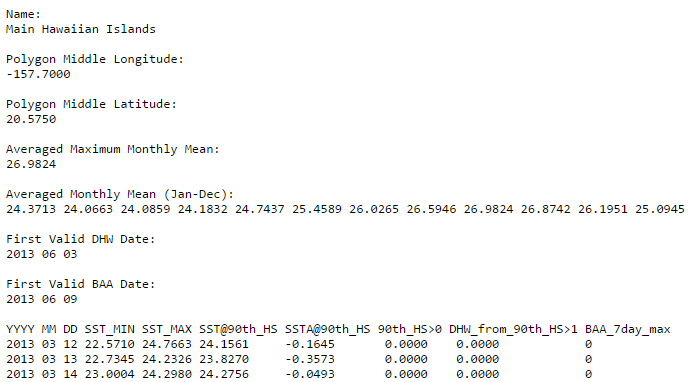 The time series data file for the Regional Virtual Stations is in ASCII text format. A sample file for the Main Hawaiian Islands can be accessed by clicking the image above. Time series data are updated daily, concurrently with CRW's daily global 5km products. These data are used to create the time series graphs found on the Regional Virtual Station pages. The first 22 rows of each file is the header containing the name of the region, the polygon middle latitude and longitude representing the icons on the Google Maps and Google Earth interfaces, the first valid DHW and Bleaching Alert Area dates, and the region-specific climatological data described below:

First Valid DHW and BAA date:
The Degree Heating Week (DHW) product for Regional Virtual Stations is an accumulation of the 90th percentile Coral Bleaching HotSpot values within each station. Because it is an accumulation over a 12-week period, there cannot be a DHW value until 12 weeks of HotSpots have occurred. Therefore the first valid DHW date is later than the first valid SST and HotSpot date. The same goes for the Bleaching Alert Area product, which has a slightly later start date, due to the fact that it is a 7-day maximum composite.

The last line of the header describes the time series data that follows. There are 10 fields in each record described in detail below:

YYYY, MM, DD:
These are the year, month, and day, respectively, of the data.

SST@90th_HS:
The daily SST value where the Coral Bleaching HotSpot value is equal to the 90th percentile HotSpot value for pixels contained in a Regional Virtual Station. This acts as a moving pixel within a region that is free to migrate with each data update. It follows thermal stress as indicated by the HotSpot value for that day. These values are represented on the time series graphs as a solid dark blue line that falls within the SST_MIN and SST_MAX range. This value is used in the information balloons in the Google Maps and Google Earth interfaces.

SSTA@90th_HS:
The daily global 5km SST Anomaly value where the Coral Bleaching HotSpot value is equal to the 90th percentile HotSpot value for pixels contained in a Regional Virtual Station. This acts as a moving pixel within a region that is free to migrate with each data update. It follows temperature anomalies as indicated by the Coral Bleaching HotSpot value for that day. This value is used in the information balloons in the Google Maps and Google Earth interfaces.

90th_HS>0:
The daily 90th percentile Coral Bleaching HotSpot value (positive only) for pixels contained in a Regional Virtual Station. This acts as a moving pixel within a region that is free to migrate with each data update. This value is used in the information balloons in the Google Maps and Google Earth interfaces. This value is accumulated over time to calculate the Degree Heating Week and Bleaching Alert Area values for each Regional Virtual Station.

DHW_from_90th_HS>1:
The daily global 5km DHW value calculated by accumulating daily 90th percentile Coral Bleaching HotSpot values (greater than 1) for pixels contained in a Regional Virtual Station. This value is used in the information balloons in the Google Maps and Google Earth interfaces. This value is represented as a solid red line on the time series graphs. 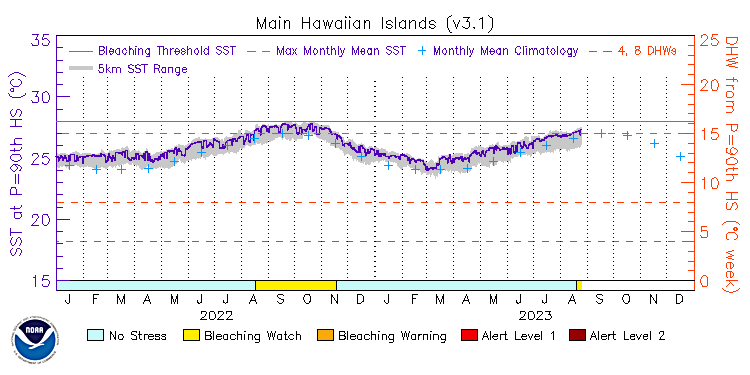 Three types of information describing the long-term mean conditions for a Regional Virtual Station site are also provided on each graph: the monthly mean climatology, the MMM, and the bleaching threshold SST. Monthly mean SST climatologies (blue crosses) are also drawn to show "normal" SST conditions at each Regional Virtual Station; the peak of the bleaching season typically falls during, or immediately following, the warmest months of the climatology. Note: the time of peak bleaching varies among ocean basins and hemispheres. Generally, for the northern Atlantic and Pacific Oceans, it is July-September; for the southern Atlantic and Pacific Oceans, January-March. The peak season for the northern Indian Ocean is April-June and for the southern Indian Ocean, January-April.

The newly calculated MMM SST climatology (Averaged Maximum Monthly Mean in the data file) is featured as a dashed light-blue line on the graphs. It is the warmest of the twelve monthly mean SST climatology values (Averaged Monthly Mean in the data file). The Coral Bleaching Threshold SST (solid light-blue line) is defined as the MMM SST plus one degree Celsius. The climatology, MMM SST, and Coral Bleaching Threshold SST are region-specific in the 5km products.